Arrive Delhi. Upon arrival in Delhi, the guest will be met by our representative and transferred to hotel. Overnight at the hotel.

This morning you will be taken to visit Old & New Delhi. Old Delhi, the former centre of Moghul Power, Old Delhi offers ancient monuments, narrow streets and bustling bazaars. Drive past the Red Fort, built in 1648 and board the ‘cycle rickshaw’ for a unique experience from the Red Fort, through “Chandni Chowk” or Silver Street, experiencing the sights and sounds of this very busy avenue heading west from the Fort. Later visit the Jama Masjid, the greatest mosque in India and completed in 1658 by Shah Jahan who also built the Taj Mahal, and the Raj Ghat, the simple memorial to Mahatma Gandhi. Later drive past the stately government buildings of the British Era designed by Lutyens, including the India Gate and the Presidential Palace. Later in the afternoon you will be transferred to the railway station to connect train to Kota Depart: Delhi at: 1315 hours by: Jan Shatabdi Arrive: Kota at: 1940 hours You will be met upon arrival in Kota and transferred to your hotel. Overnight at the hotel

Kota – An army headquarter and Rajasthan’s premier industrial centre, Kota is equally well known for its Kota doria sarees and minature paintings that often depict hunting scenes. Morning visit City Palace, Umed Bhawan (once a British Residency), Jagmandir, Chambal Garden a beautifully landscaped garden at the Amar Niwas and Government Museum, housed in the Brijvilas Palace near Kishore Sagar, displaying a rich collection of rare coins, manuscripts and are representative selection of Hadoti sculpture. Later drive to Bhainsrorgarh (50 Kms). Upon arrival in Bhainsrorgarh, check into your hotel. Bhainsrorgarh Fort Hotel is situated on a hill top and overlooks the Chambal River. The Bhainsrorgarh Fort Hotel offers the accommodation of 5 suites only, each with a different character. Later in the evening visit the Mukund Dara National Park, though there are chances of spotting wild animals but the drive is very scenic between constant stretches of mountains. The game here comprises of Panthers, Sloth Bears, Hyenas, Jackals, Foxes, Wild Boars, Sambhars, Chitals, Chinkaras, Blue Bulls, Four Horn Deer, Porcupines, Civet Cats and the ubiquitous Langoor Monkeys. Also there are fair chances of relocating Tigers in the Park in the near future as once upon a time Bhainsrorgarh was known as Home of Tigers. Overnight at the hotel.

Morning drive to Udaipur (235 Kms). Upon arrival in Udaipur, check into your hotel. Udaipur is one of India's most romantic cities and famed for its lovely palaces and lakes. Begin by visiting the majestic City Palace, built in granite and marble and surrounded by crenellated fort walls, it is the largest palace complex in Rajasthan standing on a crest overlooking the Pichola Lake. In contrast to its rugged exterior, the inside presents a delicate and feminine world of beauty with lavish use of marble, mirror work, frescoes, wall paintings, a profusion of colored glass, fluted columns, inlay work, silver doors, fountains and gardens. Late afternoon enjoy a boat cruise on the placid waters of Lake Pichola. From the lake you have a wonderful view of the City Palace stretching along the east bank, while the south bank has pleasant gardens running down to the waterside. Overnight at the hotel.

Morning city tour of Udaipur, one of India's most romantic cities and famed for its lovely palaces and lakes. Begin by visiting the City Palace and wandering through its beautiful rooms and apartments, then continue on to the Garden of Maidens "Sahelion-ki-bari”. Rest of the day is at your leisure. Overnight at the hotel.

Morning drive to Narlai (140 kms) en route visit Ranakpur Jain temples Ranakpur Temples the most magnificent 15th century Jain temples situated in the deep secluded valley of the Aravalli Hills. Though over 500 years old, the temples here are superbly preserved in a near-perfect condition. In the centre is the main “Chaumukha temple” dedicated ot Adinath. The most distinctive features are the 29 halls supported by 1444 pillars, of which no two are exactly alike. Every conceivable surface is carved and every corner and angle is engraved with Jain images. Includes visit to two more Jain temples and the Temple of the Sun God with its erotic sculptures. Thereafter continue drive to Narlai, check-in at hotel. Rawla Narlai - a royal hunting retreat, between Jodhpur and Udaipur is an enchanting new destination. Situated amidst dramatic boulders and ancient temples, the Rawla lies at a foothill of a stupendous 350 – foot single rock granite hill. Maharaj and Rani Swaroop Singh and their sons oversaw the careful restoration of this 15th century home of Marwar nobility. The ambience is a special blend of aesthetics and comfort that envelope the senses. Overnight at the hotel.

Morning drive to Jodhpur (130 kms). Upon arrival in Jodhpur, check-in at hotel. Afternoon city tour of Jodhpur the largest city in Rajasthan after Jaipur, Jodhpur stands at the edge of the Thar Desert. It was founded by Rao Jodha, the chief of the Rajput clan of Rathore. The tour includes Meherangarh Fort one of the most impressive & formidable fort in the whole of fort studded Rajasthan. It is situated on a high natural rock bluff from where you can look down on the wonderful panorama of the bustling city below. Also visit Jaswant Thada the Royal Cenotaphs. Overnight at the hotel.

Morning drive to Jaisalmer (280 kms). Upon arrival in Jaisalmer – check into the hotel. Late afternoon visit the Sand Dunes and enjoy a camel ride to view the sunset, as the sky is set on fire and Rajasthani folk musicians play haunting tunes. It can be an unforgettable experience. Overnight at the hotel.

Morning visit the city's magnificent havelis or merchant's houses, each richly decorated and carved from golden yellow sandstone - Patwon-ki-haveli (House of the Brocade Merchants) is the largest and most elaborate of the famous havelis of Jaisalmer. The Nathmalji-ki-haveli (The Mansion of Nathmalji), the last of the great havelis was built in the late 19th century. End the morning with a visit to Gadisar Lake the large natural oasis that attracted Rawal Jaisal to this site. Afternoon visit the Royal Cenotaphs of the Rawals in Barra bagh where the rulers were cremated. This is also the best place from which to watch the spectacular desert sunset, and photograph the fort. Overnight at the hotel.

Morning drive to Gajner (280 kms), enroute visit Bikaner Afternoon City sightseeing tour of Bikaner, this desert town in the north of the state was founded in 1488 by Roa Bikaji. Visit the Junagarh Fort constructed between 1588 and 1593 by Raja Jai Singh, a general in the Moghul Emperor Akbar's army. Thereafter continue drive to Gajner and check-in at hotel. Gajner Palace is an incomparable "Jewel in the Thar Desert" built on the embankment of a lake by His Late Highness Maharaja Ganga Singhji of Bikaner. During winter even now, this palace with its beautiful lake and surrounded wooded areas become the home of different species of migratory birds, most renowned amongst them being the Imperial Sand Grouse. Endangered Antelopes like Black Bucks, Nilgais, Chinkaras and other animals like the Wild Boar roam freely in this area which is now a preserved sanctuary. Overnight at the hotel.

Late morning drive to Jaipur (260 km). Upon arrival, check-in at hotel. Afternoon tour of the City - "The Pink City" is spectacularly set within surrounding rugged hills, dotted with ancient ruined fortresses. Your tour will include the imposing City Palace, still home to the Maharaja although several of the rooms are now open to the public. Many antiques and artefacts belonging to the ruling family are housed here, including a collection of weaponry. You will also visit the Hawa Mahal "Palace of the Winds", and the open-air Jantar Mantar Observatory to see the vast astronomical instruments. Enjoy a stroll through the colourful bazaar before returning to your hotel. Overnight at the hotel

Morning tour of the impressive Amber Fort, situated on a ridge just outside Jaipur City. At the foot of the hill you will mount your caparisoned elephant for the slow but steady climb up to the main gate, making your entrance in the time honoured fashion. The Fort, completed in the early 18th century, took over 100 years to build and now, although deserted, offers a fascinating insight into the lifestyle of the Moghul ruling families. Afternoon is at leisure. Overnight at hotel

Morning drive to Kesroli (150 kms). Upon arrival, check-in at hotel. Kesroli - This recently restored 16th century hill fort is located in the heart of the ‘golden triangle’ of Delhi, Agra and Jaipur. The hill Fort is sited atop the rare, dark Hornstone Breccia rocks, commanding splendid view of Agra from its ramparts, which rise to 50-65 meters. The fort was used by the royal family of Alwar for surveillance of their agricultural fields. Overnight at the hotel.

Morning drive to Agra (185 kms), en route visit Fatehpur Sikri. Fatehpur Sikri the deserted, red sandstone city that was built by Emperor Akbar as his capital and palace in the 16th century. Also visit the Bulund Darwaza the largest gateway in the world. Thereafter continue drive to Agra. Upon arrival, check-in at hotel. Overnight at the hotel.

Morning visit famous Taj Mahal and Red Fort. Taj Mahal -This most famous Moghul monument was constructed by Emperor Shah Jahan in memory of his wife Mumtaz Mahal "the lady of the Taj". It has been described as the most extravagant monument ever built for love, for the emperor was heartbroken when Mumtaz died after 17 years of marriage, during the birth of her 14th child. The central structure has four small domes surrounding the huge, central dome. Above the tombs of Mumtaz Mahal and Shah Jahan are false tombs, a common practice in Indian mausoleums. (Taj Mahal is closed on Friday). Red Fort - lies on the bend of the river Yamuna, almost in the heart of the town. It was built by Akbar as his citadel over the years 1563-73 in the finest architectural style. It has imposing gates and walls of red sandstone and a moat. Later drive to Delhi (203 kms). Upon arrival in Delhi – transfer to the International airport for flight for your onward journey. 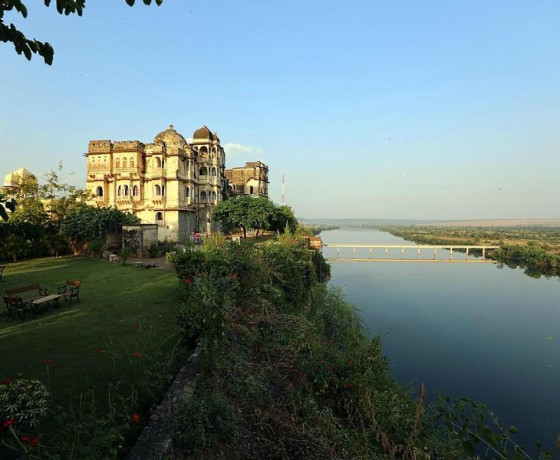 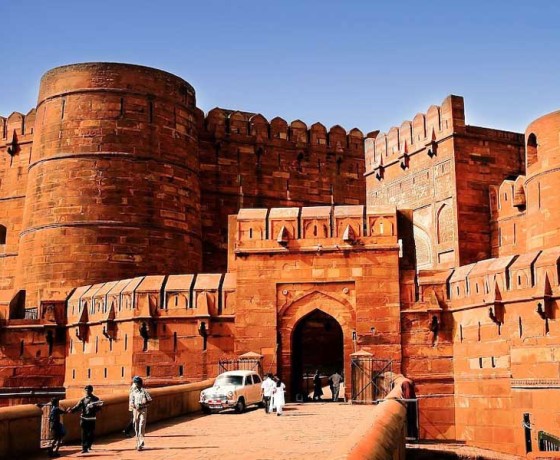 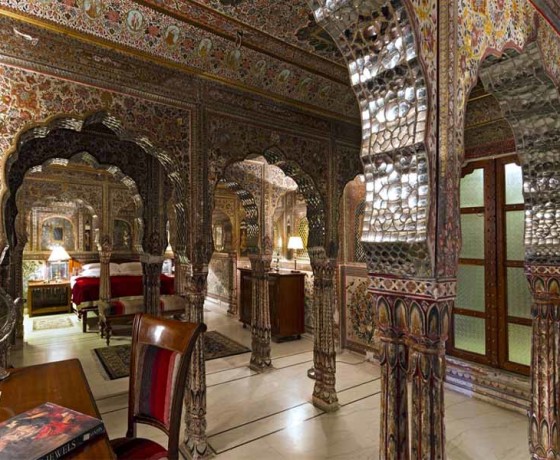